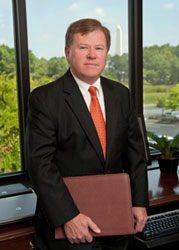 Prior to Hubbard, Mitchell, Williams & Strain, PLLC, Rick was an associate and then partner with the former Wells, Moore, Simmons & Hubbard, PLLC, beginning in 2004.

Rick concentrates his practice in mass tort litigation including asbestos and silica litigation, as well as criminal defense.